​High Quality brand name aftermarket accessories backed with a 3 Year warranty we are an employee owned company that has been servicing high volume new car dealerships in the Toronto Durham Lindsay Peterborough and Cobourg regions since 1997
Gone in Sixty Seconds?  - No Chance of that happening with IGLA installed - IGLA  the smart approach to car security

What is IGLA
​IGLA is a unique device to protect any car or truck against theft, including relay attack, OBD II hacking, key cloning, and carjacking. The device is undetectable for any theft devices and scanners since it doesn't show itself until you get authorized via PIN code, smartphone, or key fob.
What is a Relay Attack
​A relay attack happens when a car thief uses specialized electronic equipment to sniff out and amplify the communication signals used by your car and its fob. The goal is to pick up the signal from a key fob, amplify it, and transmit it over a distance to another device located near the car or truck that mimics its key. In this way, thieves bridge the proximity gap to trick your car into thinking its fob is just a foot or two away — even at a great distance.
A relay attack can be carried out in your driveway, perhaps by sniffing out a signal from the key fob inside your front door. In other cases, a thief may follow you into a shopping mall to pick up the key signal from your pocket, transmitting it to an accomplice that’s waiting near your car for the unlock.
How Does IGLA Work
​Its innovation lies in ingenious engine-start blocking technology and how difficult it is for thieves to locate - it's like looking for a needle in a haystack. The unlocking of the vehicle is carried out via key fob proximity, and then either a smartphone command or by entering a "PIN code" using the vehicle's various buttons.
How Secure is IGLA
The IGLA module cannot be detected by known methods. IGLA does not give out its presence in the car until the engine is turned on. In addition, thanks to its compact dimensions, the device can be installed almost anywhere in the car. IGLA is an intelligent new approach to protecting any new or used vehicle.
Welcome to the Digital Lock Revolution
What is the difference between a digital lock and an analog one? Traditional analog protection disconnects the main circuit using a relay. But hijackers can find the relay by listening for 'clicks', after which they can close the wires directly. Digital locking is a fundamentally new solution in which wiring is not interrupted, there is no relay, and commands are transmitted at the software level. Simply put the IGLA system is the best vehicle anti-theft device on the market. 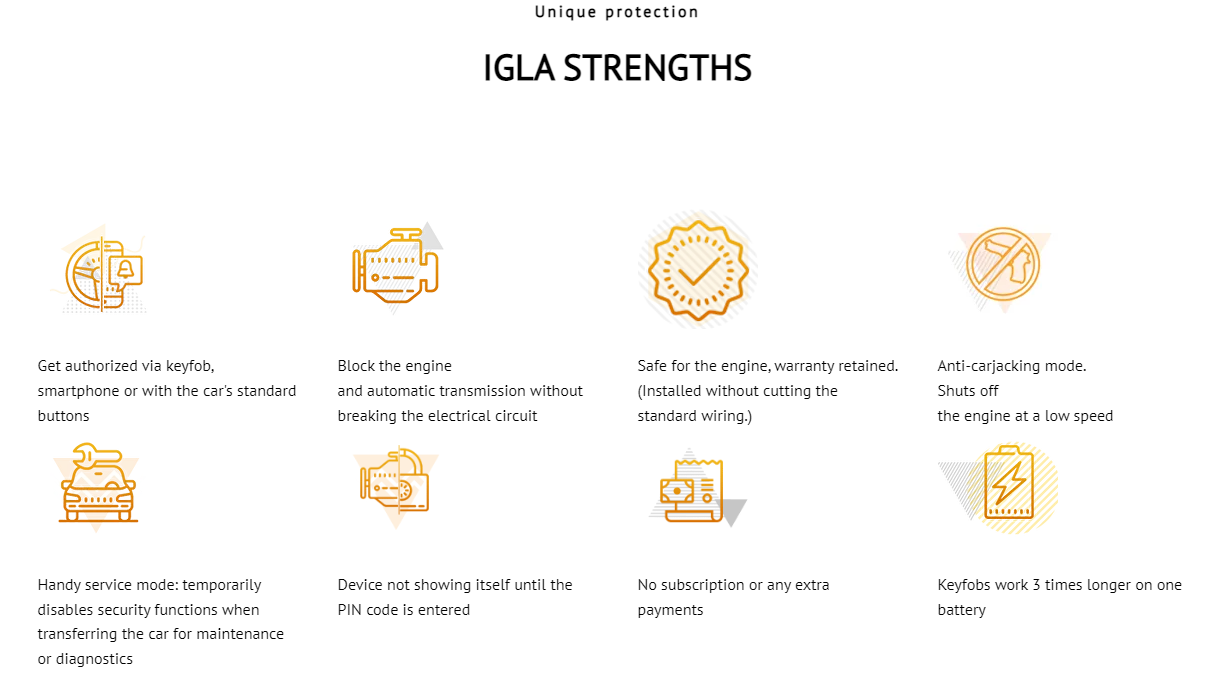 The following is an exert from a Toronto Star Article
Across Ontario, automotive thefts have been on a sharp rise, and the numbers related to it paint a startling picture.
According to HelloSafe, an online insurance-comparison platform, there were 10,900 auto thefts reported to insurers in Ontario in 2021. This equates to one vehicle stolen every 48 minutes. Across Canada, auto thefts cost $1 billion annually, with more than half of that amount covering insurance payouts.
And this trend in stolen vehicles continues to rise sharply in 2022. According to data from the Toronto Police Service, there have already been 3,385 auto thefts from Jan. 1 to May 22 — representing a year-over-year increase of 61 per cent.
What has precipitated this rise can be best understood as something of a perfect storm. A prolonged pandemic-induced shortage of microchips has sharply impacted new-vehicle production across the world, which has in turn increased the value of vehicles already on the road. At the same time, thieves have new technologies available to carry out “relay theft” whereby the radio frequency of a vehicle’s key fob is copied and used to activate vehicles with push-button starters.
Owners can do little to change the environment which has precipitated the dramatic rise in auto thefts, but there are many things they can do to make theft of their own vehicle harder to do.
One of the most popular options available today is IGLA, an anti-theft system that blocks the engine through intelligent algorithms, overriding the activation systems and ensuring the vehicle can’t be driven without system activation.
Vehicles equipped with an IGLA system can only be activated by having a secondary fob with the driver that the system detects, or by entering a pin code that utilizes a vehicle’s existing features in a specially sequenced order. An example of this could be pressing a volume control on the steering wheel, followed by activating the heated seats, defogger then fan controls. The sequencing options are infinite and the IGLA device can be installed anywhere in the vehicle and requires no extra wires, thus making it difficult for thieves to detect and disable.
IGLA systems also have an anti-hijack mode and, if it detects that it is being stolen, it will ask for the passcode to be provided within 300 metres of the vehicle or block the engine if not provided.
​The following is an exert from a Toronto Sun Article
Brampton's Mayor Patrick Brown takes the wheel on reducing auto theft
Brampton’s mayor hopes an “inexpensive” idea can help put the brakes on out-of-control auto thefts.
Mayor Patrick Brown has proposed a pilot project that would see thousands of signal-blocking Faraday cases doled out for free to car owners — so they can secure their key FOBs — in five areas of Brampton that have the highest percentage of auto thefts.
“This is really a temporary solution — to have every resident have one of these bags – until we get the broader changes we need,” he told CP24 on Wednesday. “And if we see a sharp decline in auto thefts in those five areas, then we’ll distribute (the Faraday bags) on an even broader level.”